We begin the technical deepening process in the world of flexographic printing on corrugated cardboard starting from an analysis of inks and inking systems thanks to the precious contribution of Davide Rastelli, Gianni Amendola and Simone Bonaria 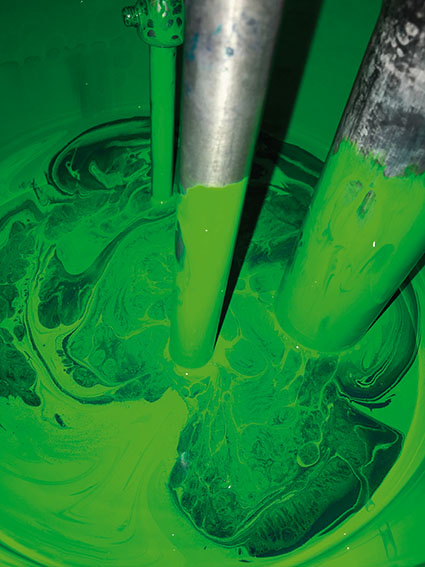 At the beginning of the journey within flexographic printing of corrugated cardboard industry, we find the ink, a component that, in different ways, will interact with all the other components of flexo printing system.In particular, on cardboard the ink used is water based, where water is used as a component of the vehicle for dispersing the pigment and as an ink solvent.

A water-based ink is typically composed of: 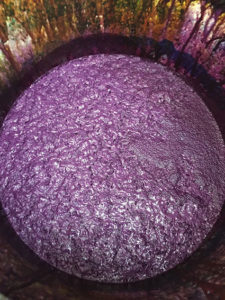 Resins mainly determine the characteristics of the ink, adhesion on the substrate, gloss and chemical-physical properties.
In order to solubilize a resin, which is insoluble in water, is required a “saponification” reaction with an alkalizing agent, very commonly Mono Ethanol Amine or ammonia; in this way a soluble salt in basified water is obtained.
During the drying phase water and alkalizing agent are evaporated with the consequent formation of an insoluble compound.
After evaporation of the aqueous part, a layer of soft or hard resin can be formed. Generally, in an ink is not used only one single resin but a mixture of resins in solution and resins in emulsion.
In inks for paper/cardboard are mainly used acrylic resins in solution and acrylic resins in hard emulsion; this allows to have good printability, ink transfer and drying speed.
The additives used in water-based inks can be: stabilizers, defoamers, spreading/equalizing and biocides. These are usually already present in the ink formulation but can be added during printing to improve and/or increase specific performances.
When using a water-based ink, pH is the most important parameter to keep monitored throughout the printing phase: generally the optimal value is 8.5-9.5.
A pH change outside the optimal process values ​​normally recommended by the ink manufacturer can lead to variations in drying speed and viscosity.
Usually pH is maintained within the optimum values ​​by using specific alkalizing additives. A pH value below the optimal value results in faster drying of the ink and a tendency for the resin to gel. On the contrary, a pH above this value leads to an ink with a high drying speed.
Obviously, since the dilution is carried out with water, it is good to check pH after performing this operation as normally the water used for dilution has relatively low pH values ​​compared to the ink system.
One of the most common phenomena that can occur during the use of a water-based ink is gelling. This phenomenon consists in the thickening of the ink, which usually starts in the chamber doctor blade, prevents the correct flow of the inking, thus creating problems in printing.
This is closely linked to a too low pH of the ink, so there is a tendency to bring the resins back to the solid state, reducing the concentration of basifying agents in the system.
Another important parameter to be managed during the printing phase is the viscosity of the ink.
A medium value for viscosity is between 20 and 25 seconds, cup Ford # 4. 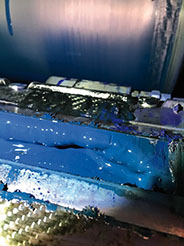 The functioning of the Ford cup is very simple: just pour the ink into the cup and measure with a chronometer the time that the liquid takes to flow through the orifice until the first interruption of flow. Furthermore, since the basifying agents are partially and/or totally volatile substances, it is important to carry out a systematic control of pH during printing and eventually restore the basic pH through further addition of appropriate additives to prevent precipitation and/or gelling reactions of the resins that are constituting the vehicle.
Another common phenomenon during the use of water-based inks is foaming, which not only lowers the level of print quality, but, drying on anilox and cliché, forms a not-solvable ink patina.
This can be chemically prevented by the addition of anti-foam additives, which must not be used beyond the quantity specifically indicated to avoid running into other printing problems (pinholing); or calibrating properly the ink system.
After the machine has stopped, it is recommended to immediately clean carefully the parts coming into contact with the ink, since the dry ink re-dissolves with difficulty, activating the washing system of the printing machine, or if it is without it, making a manual washing, through the inking circuit, putting a bucket of clean water in circulation.
It is important that no solid residues form in the printing circuit as it would be difficult to remove them and could also damage the other components of the system. 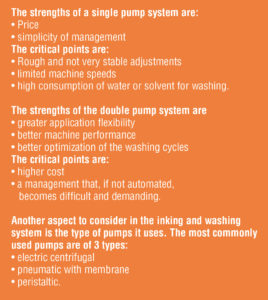 Another fundamental element of the flexographic printing process is the inking and washing system. Its important task is to transfer the ink from the bucket to the rubberized roller/doctor blade chamber and to wash the circuit before each color change.
The different inking systems on the market stand out in different aspects.
Entering into the typologies of inking systems, we can say that there are fundamental differences between the single pump system and the double pump system.
As long as the machines print at relatively low speeds, everything is easy to manage, but as the speed increases, the problems are revealed. Certainly, from a technological point of view the double pump system is more advanced due to the possibility of adjustments and optimizations, but both have strengths and weaknesses, and sometimes manufacturers prefer a basic but simple management system rather than a more complex one, but which requires a greater technological investment. 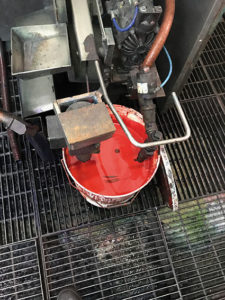 Currently the most commonly used are pneumatic pumps with membrane, both for the lower initial cost and for the greater possibilities of management, which often occurs through a pressure regulator that directly regulates the speed of the pump. To be maintained, this type of pump requires time to dismantle and replace the internal balls and gaskets, inevitably causing a machine stop.Also for this reason, some manufacturers of printing machines for cardboard, have preferred the use of peristaltic pumps, which have as only consumable element the “milking” tube: this allows the replacement in a couple of minutes. Other great advantages of the peristaltic pump are pumping accuracy, reduced noise, reduced consumption. However, to detriment there is the initial cost.The adjustment possibilities depend on the type of pump chosen, and range from simple manual regulators to advanced systems, managed continuously by the PLC.The simple manual regulators have ridiculously low costs but force machine operators to make continuous adjustments, and often prevent the process from being standardized.The advanced systems that use PLCs for control have higher costs, but guarantee fine and stable adjustments over time, with inking and washing cycles that can be set and can be interfaced with the machine, allowing the process to be completely standardized.

The most common problems and their causes 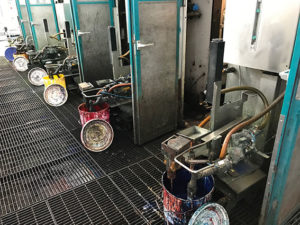 Foaming is a problem due to micro bubbles that are incorporated into the ink and other pumped liquids.
It is a more obvious problem with water-based inks, while it is almost not influent for solvent-based inks and it becomes more evident, when the machine speed increases: normally reaches a critical point around 300 m/min.
Here we return to pumps: a closed circuit creates less foam, but a better balance of the system is needed, and therefore a more sophisticated management system.

Leaks from doctor blade chamber
This is a phenomenon that can have innumerable causes. From incorrect mechanical adjustment, to problems of fluid dynamics that are generated inside, up to the problems of wear of blades and gaskets.

Contamination
This problem manifests itself differently depending on the type of fluid used.
Water-based, solvent-based or UV-based inks have different contamination problems, and different solutions.
However, most problems are related to unsuitable or poorly used washing systems. Washing is a very important phase that must not be underestimated and to which we must dedicate the right time and the right investments, so as not to run into contamination problems.

Ink recovery can be an integral part of a washing system
If the washing system is efficient, it will have a greater ability to recover the ink in circulation. But even a system optimized to put as little ink as possible into the circulation is the basis for waste reduction.
The topic about saving water for washing definitely deserves further study. Increasingly greater attention is paid to disposal, both due to increasing costs and greater sensitivity towards a more ecological approach, from which it is no longer possible to do without.
Today it is enough to do some quick calculations to understand that at 0.50 euros per liter, with increasingly shorter print runs and frequent color changes, even significant costs can be reached at the end of the year. 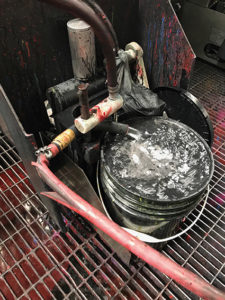 It is possible to have inking systems that also act as washing, or dedicated washing systems that intervene after the ink pumps have recovered all the ink.
To conclude, the main objective of the inking and washing system is to lay down ink without problems, to recover the greatest amount of ink in circulation at each job change, to wash in depth every part of the circuit to allow changes between different colors without encountering problems and finally allow a wide range of simple and effective adjustments.