New Aerodinamica continues building systems no-stop all around the world among trips, trips, reliefs, obstacles and tests all to be told… 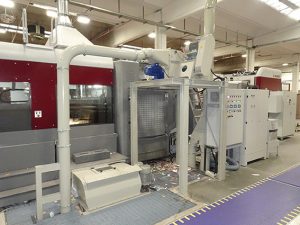 There are construction projects ending brilliantly in a few steps while others need a more structured process like the one you will read of today. We are in the province of Sondrio, Valtellina: here is based Ghelfi Ondulati, a family-run company born in 1952; their main focus is the production of high quality corrugated board for fruits and vegetables, working with Italy, France, Spain and North Africa.
Such relevant presence in the field requires an increase in productivity and constant growth; therefore, last year Ghelfi Ondulati realized its need to convoy waste products, decreasing dust and thus making the spaces cleaner and healthier. 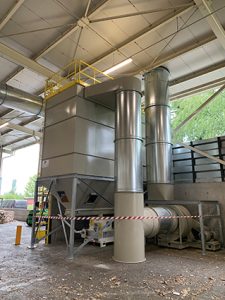 “When we considered making these changes by installing an aspiration and waste recovery machine we could not but choose New Aerodinamica”, says Matteo Casti, Process Engineer – “We had already cooperated with the Bergamo team and the results have always been very successful. So the choice was fast and targeted!”.
Thus, in March 2021 New Aerodinamica tech department takes the first on-site inspection to understand the feasibility of the intervention and take all the appropriate measures, even taking into account the tight spaces and importance of not blocking the production line. “Given the customer needs we considered mandatory, after a first project draft, to discuss with Ghelfi what we had projected and this phase has been helpful to predict issues for implementation phase” says Giuseppe Zinetti, Project Manager of New Aerodinamica.
“Another relevant feature was the close cooperation with an electrical system company, a partner who supported us in structuring a PLC to enable remote control and constant checks on fans and system consumption levels”. 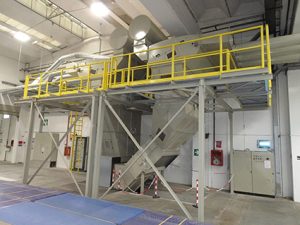 Everything to create a plant thanks to Industry 4.0 incentives able to save energy, as it is fundamental nowadays.
“In Ghelfi Ondulati we planned to create a new suction and cardboard cuttings waste plant without stopping the production lines, dividing them into three macro areas each consisting of two working machines allowing assembly and test phases while the others were still operative”.
Apparently easy but complex work to develop due to some issues, like the cardboard type, difficult to shred into waste material for the aspiration and the consequent expulsions and recycling. 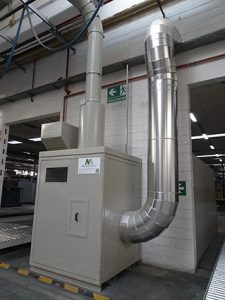 “An obstacle not easy to bypass” explains Paolo Radaelli, New Aerodinamica CEO “but thanks to the active cooperation with Ghelfi Ondulati technicians and some “New Aerodynamics style tricks” we solved step by step, making the plant 100% performing”.
This successful operation meant a few machine stops and completely deleted tape clogging (especially on Mastercut machines) and, at the same time, ensured the air filtering indoor before being released into the atmosphere; these changes mean better environmental conditions either inside and outside.
“The new system has made it possible to reduce or even cancel the maintenance work” concludes Matteo Casti ” and let’s not forget about health improvement for the employees, to an incredible air quality. What can I say, even this time 100% satisfied with New Aerodinamica!”.
Such enthusiasm has cheered the New Aerodinamica team, more and more aware of the power of cooperation… towards further goals!