The new Bimec STM80 slitter-rewinder chosen by Laminati Cavanna to expand its cutting department came into operation last September. And as often happens in new projects like this, the initial goal has changed during construction due to unexpected needs. That’s why the final focus became the cutting of more complex and diversified materials in response to customers’ requests. 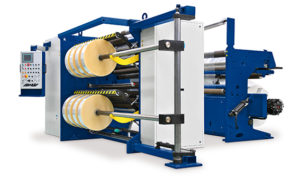 Consolidated and recognized Italian excellence in the converting world, Bimec, manufacturer of slitter rewinders designed to convert plastic films, paper and laminates, and Laminati Cavanna, subcontractor that works in the laminating of plastic film for food packaging, pharmaceutical, technical and industrial, met in 2018 when Cavanna decided to undertake a new project for which it was necessary a new slitter rewinder. Initially aimed at processing standard plastic material, the two companies found themselves having to modify and readapt the project during construction: the goal of the project became the cutting of a much more rigid and thick laminate, intended for the pharmaceutical and food sector.To serve the market working as a subcontractor, like Laminati Cavanna, means to be equipped of a very performing machinery, and to be ready to quickly answer the requirements of the customers. The change of this project witnesses the capability of the two companies to listen to the market and to act in order to reach their common goal. This change actively involved Bimec and Laminati Cavanna: the collaboration and the speed of adaptation of both led to the birth of a new successful working relationship, in which Bimec is now a partner of a great Italian company, and Cavanna can count on an efficient slitter rewinder to offer its customers a high quality product and service.“The success of this project testifies to the importance of listening and collaborating, of being a reliable business partner who is ready to support each other to offer the market the best possible service and product” says Davide Bottoli, Bimec’s general manager. 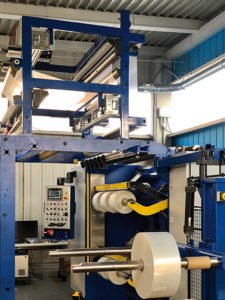 “As I announced during the interview that was published in the May / June 2019 Converter issue on the occasion of our 50 years of activity, the new Bimec dual-spindle slitter-rewinder has finally come into operation. The guarantee of our working processes is supported by ISO 9001: 2015 Certification and BRC Certification (grade AA) which ensure a constant quality level of the service aimed at satisfying customer needs. Quality, innovation and continuous improvement are part of our corporate philosophy, and all this also passes through the fundamental and continuous technological updating “, comments Anna Paola Cavanna of Laminati Cavanna.

THE SLITTER REWINDER IN DETAIL
The Bimec slitter rewinder purchased from Laminati Cavanna is an STM80, belonging to the STM series, a dual spindle machine with an ergonomic and modular design that allows to create many slitting and rewinding solutions, thanks to the high flexibility of its equipment. This machine also allows to reach high speeds and excellent. It is a universal machine for standard processing but also for narrow web slit and label stock. The model purchased by Cavanna was made in one of the five possible configurations, the E version, with a bridge structure, suitable for the installation of supplementary systems and devices. The Futec inspection system has in fact been installed on the slitter rewinder for the automatic double-sided control of the material, especially useful for ensuring a high quality of the material, since it is able to detect and report any inclusions. The structure of the cutter also allows to reduce the footprint inside the plant where it is installed: the operator does not need to work on the back of the machine because it is located in an intermediate position between the unwinder and the winding shafts.As in the other slitter rewinder Bimec series, the batch roll is loaded on a shaftless unwind stand placed on the rear of machine, with lifting from floor level to working position. The STM80 is available in other two versions: the first one with 2 a.c. asynchronous motors with digital inverters (one for draw unit and one for both rewind stations), and the second one with 3 (one motor for each rewind station). The operator’ work is even more simplified thanks to a touch screen operator panel for data setting and visualization, recipe storage and diagnostic. 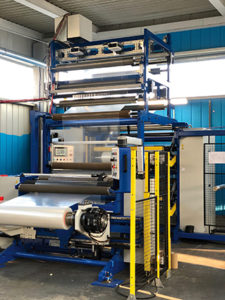 This slitter rewinders features many automatisms useful to reduce downtime costs: it has an easy and accurate system for manual core positioning on rewind shafts through manual or automatic laser beam pointer. There are differential air rewind shafts – with rings up to minimum 20 mm of width – for an accurate and independent tension control for each reel in rewinding.
Even if it’s not a duplex turret slitter rewinder, the STM80 is able to reach high speeds, also with stiffer and thicker materials. Just the power of the motors, together with the high quality of the entire equipment, represented the strength that allowed the adaptation of the machine during construction. With the purchase of the Bimec STM80 Laminati Cavanna now has a slitter rewinder capable of taking some of its production lines to a further level of processing, thus also including cutting, inspection and winding the material in reels. The Bimec slitter rewinder is the second cutting machines in Laminati Cavanna’s plant, so it make it possible to double the cutting capacity and to increase productivity.