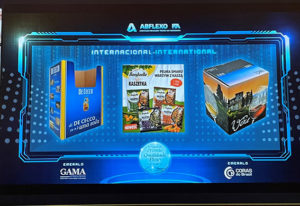 A little less than a year after the birth of BlueEdge, this new technology for the production of flexo clichés for corrugated cardboard, flexible film, paper and labels has already positioned at the first place of the Brazilian AB Flexo competition, in the only category possible for participants not belonging to the state of Brazil.

The last 21st of January it’s been a magical evening for Italy, which brings home first, second and third prize for the INTERNATIONAL PRINT category. A single category for international converters, which does not distinguish between substrates (cardboard, film, etc.) nor between types of printing (coated, uncoated, compostable materials, etc.). It is therefore an international category in which any printer from any country in the world can win.

Z DUE is proud of its partners Scatolificio Antonio Sada & Figli, Imball Center and Scatolificio Medicinese who have conquered a well-deserved podium, awarded for being true innovators and quality printers able to stand out in the whole world, each in their own field. A special thanks also to our partner Reproflex3, to whom we owe an important part of this victory.

“This is why Z DUE is keen to underline the fact that, despite the fact that actually there is a Gold, a Silver and a Bronze award, for the record won respectively by Scatolificio Antonio Sada & Figli, Imball Center and Scatolificio Medicinese, on balance it is a first place for each, as all three Italian winners outperformed every single competing printer from every single country in the world (except Brazil). The scope of this result, as you can well understand, is much more extensive than it appears2, comments Marco Mingozzi of Z Due. 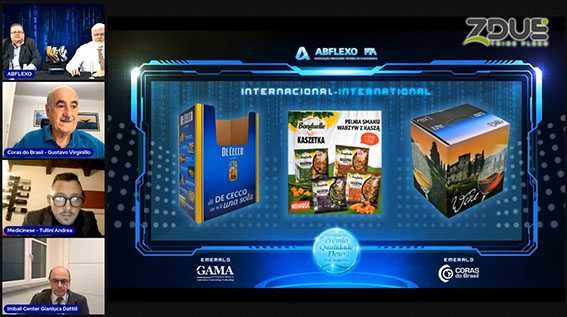 Scatolificio Antonio Sada & Figli brought to the competition a huge De Cecco display, made on post-print coated cardboard with BlueEdge technology, awarded for the great quality of the print. Imball Center once again stood out on flexible film with ProjectBlue technology, capable of obtaining a result comparable to offset and rotogravure with a simple four-color printing. Scatolificio Medicinese, on the other hand, managed to graphically conceive and then create in flexo a splendid generic wine box with a play of lights through the use of two different varnishes – glossy and opaque – capable of giving a 3D effect to the box.

This victory for Italy is the result of close collaboration between converters and Z DUE, which acted as promoter of innovation in flexo.
“We at Z DUE are convinced that the secret of this victory, in addition to the technology and the great printers’ skill, is the deep partnership between the parties, which overcomes the concept of customer / supplier and breaks certain commercial and competitive barriers – let’s say – to become a whole, a single reality that looks to the future, to the market needs and opens the doors to experimentation, true innovation and above all… confidence”, concluded Mingozzi.