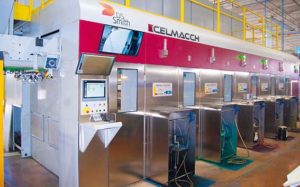 Toscana Ondulati has been part of the multinational DS Smith since 1996, while maintaining its historic name on the market. Two production plants, one in Marlia (Lu) and a second one built in 2002 in Perignano – Casciana Terme Lari near Pisa, where about 110 employees work on two shifts for 5 days a week. Toscana Ondulati is an integrated production site, thanks to the presence of a corrugator that produces cardboard sheets: 90% are used to satisfy internal needs, while the remaining production is diverted to other factories of the group. Even if the aim, as says Luca Buonaccorsi (operations manager), who accompanies us in the printing department to witness up-close the latest investment, is to use the whole corrugated cardboard production in-house.
Big amounts are made in this plant, with over 100 million m2 of cardboard produced for a turnover of more than € 45 million. The long runs are the master in the production departments, therefore, given the quality taken for granted, productivity is the primary requirement to be met.
The core business is microflute packaging for the food sector, from the takeaway pizza box to large triple wave packaging for various industrial sectors. As for the food sector, Perignano plant was the first in Italy to obtain the BRC Certification. 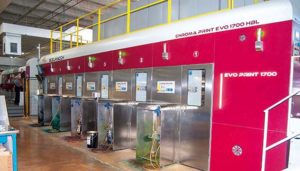 In addition to the corrugator, the fleet of machines is made up of 8 complete printing and converting lines; the philosophy of Toscana Ondulati has always been to produce everything in-line with a single step, and it is clear that considering the big volumes produced, operating in this way brings obvious advantages as regards quality and productivity.
In this case, as already happened for other installations, Chroma by Celmacch has completed the line with a die-cutter supplied by BOBST, which was already in operation in the company.
“Last spring was installed the Celmacch flexo machine, a 5-color Chroma EVO 1700, which replaced an old machine with technology from the 1980s, which in terms of quality and safety no longer met our needs”, Buonaccorsi tells us while the machine is running in full production, “we chose this machine, the first for us, but not for the DS Smith Group, which in its factories in Europe had already chosen Celmacch technology, precisely for the references collected in our company and for the excellent printing results carried out in the various tests and during visits to other production facilities. Installation and start-up phase 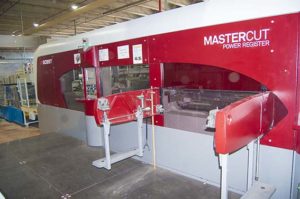 were extremely fast, also thanks to the fact that it is a very intuitive and easy to learn technology; our operators, after the training period agreed with Celmacch, started to work in total autonomy without particular difficulties, with precise and punctual assistance on which we can always count. Even if there are only a few months that we are using the new machine, I can confirm that the goal of increasing productivity has already been achieved”, concludes Buonaccorsi, confirming that with the installation of the new Chroma EVO 1700 he closed so far the program of planned investments; obviously the company must never stop, so in the future further interventions will be planned to support greater growth and productivity.

Chroma EVO 1700, positioned in-line with the BOBST Mastercut 1.7, is a HBL 5-color printing machine developed for high performance and capable of guaranteeing the highest standards in flexographic printing. The machine offers a maximum format of 1700 mm in width and 1300 mm in sheet lenght.
“Once again, Celmacch represents a winning choice for companies looking for a flexographic machine for in-line configuration with a latest generation automatic die-cutting machine.
Celmacch offers a wide range of printing solutions and rotary die cutters: Chroma EVO is the intermediate model, in fact the top of the range is Chroma High Tech, while the entry level version is called Chroma Compact”, commented Luca Celotti, managing director at Celmacch Group. 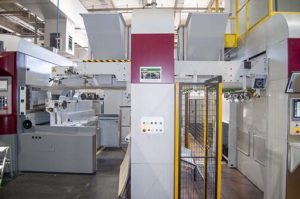 The machine chosen by Toscana Ondulati consists of a latest generation direct drive Siemens feeder with high precision belts. The transport of the sheet is guaranteed by vacuum technology with belts specifically designed to guarantee maximum adherence and printing precision, in order to obtain a register tolerance of ± 0.2 mm between the different colors. Thanks to the HBL configuration, the operator benefits from perfect ergonomics to perform all work change operations with maximum efficiency and safety. Maximum attention has been paid to all the technologies that guarantee a swift job change: the printing cylinder is equipped with a Matthews double-bar attachment with pneumatic tensioning system. The inking system is equipped with carbon chambered doctor blade system, also produced by Celmacch, a peristaltic pump for ink injection and a pneumatic return pump. The machine also features a new system developed by Celmacch for daily anilox cleaning. A bar equipped with high-pressure nozzles ensures periodic and homogeneous cleaning of the anilox, in order to improve and prevent problems of poor maintenance of anilox rollers.
“Chroma EVO, thanks to the vacuum transfer, guarantees perfect operation in-line with die-cutters of other manufacturers, as in this case. I would like to underline – concludes Luca Celotti – that for us it was absolutely important that Celmacch closely collaborated with DS Smith for the definition of all safety aspects, rigorously analyzing the production phases, to guarantee the users the safety necessary for the performance of their work. This according to a zero-accident policy, very significant for Celmacch Group as Ds Smith”.

“Bobst” and “Mastercut 2.1” are registered trademarks owned by Bobst SA and/or its subsidiaries. Celmacch is not the producer of the machine Bobst and for the sake of clarity Celmacch wishes to clarify that there is no any commercial and/or technical link between Bobst and Celmacch.