Trip across the border for Gifasp, which, hosted at Heidelberg headquarters in Wiesloch in Germany on 14 and 15 November, held the Autumn Assembly during which the sector’s performance was discussed in the presence of a good number of cardboard converting companies and supplier partners

The Autumn Assembly of Gifasp, the group of Assografici, that includes manufacturers of folding cardboard boxes and cases, whose president is Alessandro Tomassini (Tecnocarta), is always an interesting event to trace a balance of the past year, discuss problems in the sector, give one look to the future, together with colleagues from other companies, in an associative environment where competition is put in the background. And if the Assembly is organized with one of the world’s leading printing and converting technology manufacturers such as Heidelberg, the event is more and more special. And this is exactly what happened last November when Gifasp’s associates were welcomed at Print Media Center Packaging, which features offset, digital and converting machines for a complete production cycle of a cardboard converting company, including workflow and platemaking. The meeting took place with a view from above on the demo center, the real feather in the cap for Heidelberg, which concentrated many investments in this sector of vital importance for future business strategy.
Stephan Plenz, member of the board of Heidelberg and responsible for all the technological part of the German manufacturer, gave a warm welcome to the guests from Italy, a good number of cardboard converting companies among the most representative of the sector. To these companies were presented the strategies of the German manufacturer, which are now increasingly focused on the world of packaging, both with digital and offset printing, with finishing and converting technologies.

Heidelberg: market leader in the market of sheetfed printing machines for cardboard converting

Heidelberg Italia’s general staff was also present, with Mauro Antonini who proudly told how in 2018 Heidelberg, who was the last manufacturer to enter the offset packaging print sector, became market leader with a market share of 52%.
The day then continued with presentations and demos of Prinect workflow, the Multicolor system, a software that working on a mix of different types of AM/stochastic screen allows the reproduction of a very wide color range, managing to simulate many Pantones with seven fixed colors (only in presence of a correct linearization of the machine), also digitally (the precise percentage may vary from customer to customer based on the types of work to be reproduced and consequently Heidelberg is available to sit at the table to discuss whether a technical choice of this type could be ideal or not), the Primefire 106, the machine by Heidelberg in 70×100 format for cardboard converting, the XL 106 8 colors and the XL 162 in addition to the die cutters and folding machines by MK, the Chinese partner at which Heidelberg has outsourced, on its own projects, the manufacturing of the converting machines. “All our technology is based on the push-to-stop philosophy, that is, continuous production without interruption by the operator, a concept that at next Drupa we will continue to promote because it is capable of giving great results both in terms of printed quality and productivity and therefore obviously also economic advantages”, adds Antonini.

At the heart of technological production: from printing machines to production of gears 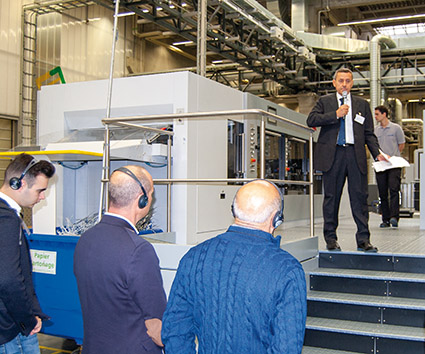 One of the most top-secret areas of the Heidelberg plant is located just behind the wall of the Print Media Packaging Center, an area that very hardly is open to the public and exceptionally has been opened to Gifasp group (but unfortunately without the possibility of taking pictures). Here takes place the production and testing of Primefire 106, Gallus digital technologies and commercial and paper-based offsets machines.
A visit to the gear manufacturing department of Heidelberg machines was also very interesting. A very instructive tour to understand what is behind such a company. We have to remember that Heidelberg owns a foundry near Stuttgart and receives a load of semi-finished products every day which then take shape in the various departments, such as the gears of the machines, which are checked one by one to ensure maximum printing precision, because as Mauro Antonini recalled, the quality of the printing machine inevitably passes from the precision of the gears. The tool for producing the gears has a cost that varies between € 15 and € 60 thousand depending on the diameter to be produced and is used for the production of around sixty gears, then it must be replaced. This is just a small but significant example to really understand the value behind a high quality technology where everything, from the single bolt to the most visible element on the machine, requires the utmost attention in production in order to guarantee the top of quality.
Just to give some data, about 6 thousand people work in an area of ​almost one million square meters: a small town serving Heidelberg technologies. 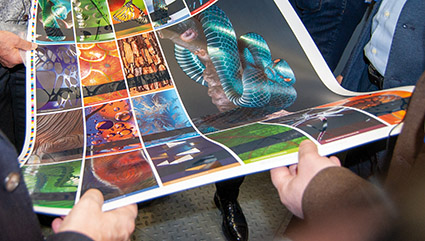 Marcello Antonioni, StudiaBO presented the data of the Economic Observatory relating to the economic-financial conditions of the Italian sector of folding cases and boxes, analyzing 62 financial statements of companies, not all GIFASP associated.
The sector remains healthy, with growth in turnover and adequate levels of profitability.
Among the companies analyzed, there is a 16% of “best performers” companies that recorded an EBITDA level higher than 15% of the production value. The level of indebtedness of the sector, always compared to the manufacturing average, is also quite contained.
The analysis of 2018 financial statements by product sectors confirmed the good performance for companies specialized in the production of cosmetic packaging, compared to general packaging and pharmaceuticals, with growth rates, margin levels and self-financing capacity significantly higher than the sector average.
Turning instead to the dimensional analysis of companies, it is noted that medium-sized companies, those with staff from 50 to 99 units, are capable of particularly favorable performances both as regards long-term growth and for a certain financial strength. This result does not take into account the possible belonging to Groups of different companies, an element that could be a critical success factor especially in terms of efficiency, in light of the possible economies of scale that can be more easily achieved at group level. Finally, the analysis of 2018 financial statements confirms significantly more favorable performance in the efficiency of use of the capital invested for the most export-oriented companies in the sector (with at least 20% of the turnover achieved abroad), which also benefit average collection times from customers (customer-days) significantly lower than the average.
The short to medium-term prospects appear overall favorable for the sector’s revenues: sectoral world trade (source ExportPlanning.com) has reached (according to 2019 estimates) almost 29 billion euros, with an average annual growth rate of over 5 percentage points in values in euros during the last decade ( 2009-2019); in the 2020-2023 scenario, average annual increases are expected in the order of + 4.5% in euros.

From the debate following the presentation, however, concern emerged about the volatile trend in the cost of the raw material; in particular, it worries an excess of waste paper which in fact has highlighted a circular economy process unable to “close the chain”, with serious repercussions on the entire sector. As pointed out by some operators who intervened, in fact, “China no longer buys the pulp from Europe, the European paper mills are unable to dispose of all the paper from the separate collection and the chain is broken; this is a very serious problem which sooner or later will have to be dealt with to avoid further competitiveness problems in the sector”.

As announced by Gifasp president, Alessandro Tomassini (Gifasp executive committee was composed last October, and is therefore fully operational) a new project is underway to start an Academy that can lead to the implementation of seminars in the medium term, development of issues commonly faced, which, with the precious support of the technicians of the companies supplying materials and technologies, can be discussed at an associative level. Work documents will also be prepared to provide standard procedures to be followed by technicians working in the cardboard converting companies