Operating since October 2019, the new EDF Europe HGL RDC 1628 line was a logical choice for a company such as Imballaggi San Martino based in Lograto (BS), to follow the guidelines of its industrial plan, whose aims are growth and consolidation on the market. The new line has already shown higher performance and capacity than the previous system

The foundations for the current industrial reality were laid in 1982 by Gian Battista Gorio with simple die-cutting works, although soon, driven by its customers, the company expanded its services, acquiring new skills and technologies, offering itself on the market in the late 90s with the name Imballaggi San Martino (ISM).
In those years, a new 2,500 sm warehouse was added to the existing plant with a part dedicated to offices and space to house two new converting lines. Over time, this family business, which today produces corrugated and solid cardboard and alveolar polypropylene packaging, is appreciated for its seriousness and competence, and in 2015 it moves to the modern factory in Lograto (BS). The site (60 thousand sm of which 17 thousand covered) is designed and built according to the most modern principles that favor the correct flow of production work and logistics aimed at containing times and costs.
The more than positive commercial and operational results allowed, after only two years from the installation of the 6-color casemaker line, to proceed with the purchase of the new HGL RDC 1628 high productivity rotary die cutter with HD flexo printing. The installation of the new line also completed the total interfacing of the quality management and logistics software integrated with all company’s production lines. The innovative printing with direct drive technology combined with the latest generation rotary die cutting of the HGL RDC 1628 solution guarantee the highest quality obtainable for corrugated cardboard packaging, offering the possibility of high definition (HD) printing even on coated cardboard. 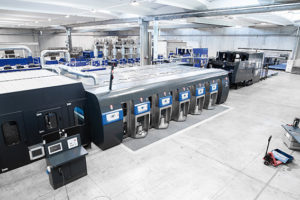 Relationship of trust and collaboration between two major companies:
Imballaggi San Martino and EDF Europe
EDF Europe is the Italian branch of Dong Fang Group, world leader in the corrugated cardboard equipment sector, whose headquarters is in Bologna, to which the EDF Europe Converting research and development center based in Treviso has been added since 2015.
EDF Europe can count on a very interesting range of machines consisting of 4 casemaker models 618 and 821 with top printing and 924 and 1228 with bottom printing. After a lot of research in this field it was necessary to do the same to develop something innovative in the sector of rotary die cutting.
“In fact, Dong Fang Group was born by building rotary die cutters, a workhorse that operates with high performance in every corner of the world and continues to sell several units every year. EDF Europe is also known as a supplier of high-end RDC peripherals; complete lines are installed in all EMEA areas together with the die cutters of parent company DF”, says Enrico Galloni, CBDO of EDF Europe. Starting from this technological experience, the new HGL 1628 has been designed with the aim of combining maximum quality and productivity in rotary die cutters. 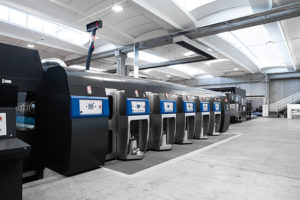 The evaluation process carried out by ISM began more than a year ago, and following the great trust consolidated over years of profitable collaboration between Gorio family and EDF Europe, ISM has chosen to install the first HGL 1628 RDC by EDF Europe.
The new HGL is equipped with all the technologies developed in recent years by EDF and also present in the other models. One of the most important is the “only one motor” technology, which allows the use of the same micromotor to automate all start-up functions of the machine, thus drastically reducing the inventory of spare parts, since with only one type of motor, whose change takes place in “plug and play” mode, all automation is managed in any area of ​​the machine.
The air filter is supplied as standard with a new cyclone technology, the closed loop system that maintains a positive air pressure in the printing area, drastically reduces the dust that adheres to the printing plates. 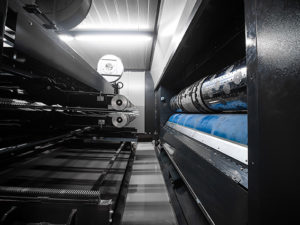 The feeding unit is the result of the adaptation of the already tested and consolidated no-crush feeder made by EDF for all its converting machines produced so far in Italy. The change of the anilox cylinder on the printing units is completely automatic. The machine is equipped with an IR drying system, carbon fiber chamber doctor blade, temperature and viscosity control, camera for checking the print register.
The line is fully automated with loader, vacuum stacker, double pose separator and automatic palletizer. Another interesting feature is the ability of the breakers to quickly change the upper press in order to adapt to irregular box formats or interwoven multi-laying. Die assembly is also quick, grinding is automatic as well as dust collection.
“As always, EDF Europe has completely integrated the line into the layout of the production plant, thanks to an automatic transport system, also supplied by EDF; obviously the whole line is interconnected with the department of the company that deals with planning production and statistics, and is also connected to EDF Europe’s headquarters for remote service and control”, explains Galloni. 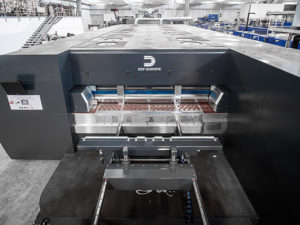 The ISM installation is a “pit” version but the HBL version is also available, 3 lines of this type have already been sold and will be installed by the end of 2020.
“The new HGL line will make the company able to enter the market for die-cut boxes in coated and HD printed cardboard, further expanding the already wide range of products that we are able to offer, and, as we think we are a modern and open company, we are happy to welcome visitors interested in seeing our new production line”, comments satisfied Diego Gorio, owner of ISM.