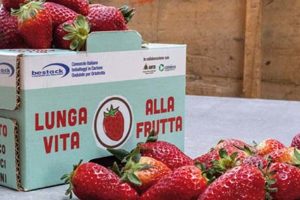 The first Italian strawberries arrive on the counters and the 2021 season opens with good news in the name of sustainability. In fact, there are more and more supermarkets that choose to bet on innovative packaging to combat food waste, a phenomenon that in Italy – according to the latest estimates by Last Minute Market – is worth almost 10 billion euros, also considering the losses in the field and waste in the industry and distribution, and which primarily concerns fruit and vegetables. 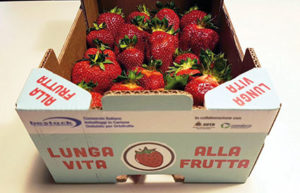 In fact, starting from the 2021 campaign, Esselunga has also chosen to implement the Attivo! standard in its stores, which starting from the last week of February is used to distribute strawberries – and even small fruits – in the group’s stores.
But the chain led by Marina Caprotti is not the first to have bet on the anti-waste packaging patented by Bestack Consortium. The pioneer of this project was in fact Dimar, a large-scale distribution group belonging to Selex present in Piedmont and Liguria with stores with signs Mercatò Big, Mercatò and Mercatò Local, which was the first to experience the benefits of Active! packaging in its stores, starting from strawberries and then use it successfully also for some types of summer fruit.
A winning and above all sustainable choice, which soon also involved two other distribution groups of Selex family: Alì Spa and Ce.Di Marche, which have been successfully using Active! packaging for some time for handling strawberries and also for other fruits. 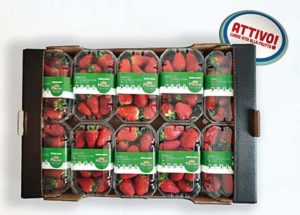 takes its name from the process of “activation” – in the literal sense – of corrugated cardboard, in the phase immediately preceding the packaging of fruit and vegetables. With a special technology, the packages are sprayed with a mixture of extracts of natural essential oils deriving from fruit, which perform an antioxidant function on fruit and vegetables stored in cartons, slowing down their natural ripening and rotting process. Fruit handled in Active! Packaging therefore remains good for longer on supermarket counters and even at consumer’s home. The numerous laboratory tests carried out in the experimental phase have shown that in the Active! Packaging, compared to other traditional types of packaging, the quantity of product to be discarded, in the case of strawberries, is reduced by 10% and the shelf life is extended up to 24 hours.
Important benefits regarding the environment and the fight against waste, which also have an economic impact. Taking into account that in Italy almost 180 million euros of strawberries are sold between hypermarkets and supermarkets, the 10% waste differential given by Active! packaging it would bring savings of 18 million euros.