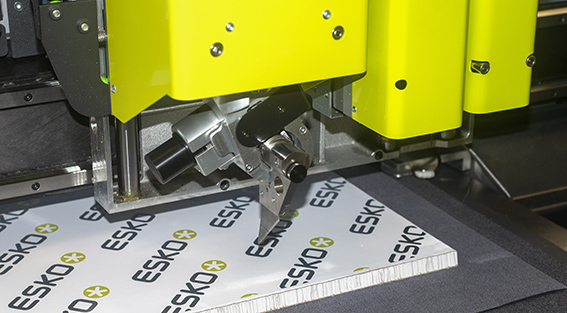 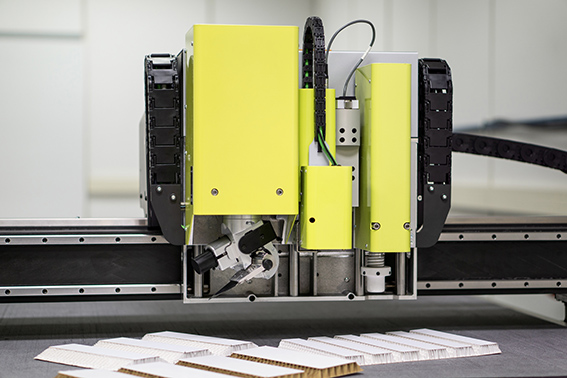 Esko has announced the release of its innovative VariAngle tool for the Kongsberg C and XP range of digital finishing tables. VariAngle enables cutting at any angle from 0o and 60o at high speeds, delivering total freedom in the design of 3D creative displays while also resulting in faster setup times and an uplift in cutting speed.
“Fitting the new VariAngle tool makes existing Kongsberg C and XP tables completely self-sufficient and capable of delivering most any creative design,” said Digital Finishing Product Manager, Knut Johansen. “Unlike with other brands of finishing table, using VariAngle removes the need to stop production when changing tools, drastically reducing setup time and increasing cutting speed.
“Other finishing tables cut with a fixed angle blade, which means it’s necessary to change tools to cut at different angles,” explained Knut. “For some designs, three or even four different cutting tools can be required in the production process. But with VariAngle, Esko has developed a single tool which cuts straight lines at any angle selection in half-degree increments between 0o and 60o and at up to 100m/min; a breakthrough innovation for the industry.

“In conjunction with the new 3D design features of Esko structural packaging design software ArtiosCAD, the intelligent, automatic VariAngle tool delivers a new level of creativity,” he said.
“Importantly, as well as delivering excellent cut quality at the highest possible speeds, the tool behavior is defined from within the Esko ArtiosCAD structural design software, therefore no operator input is required at the cutting table itself so productivity is boosted by a further 25 per cent.
“The unique combination of the new tool and the supporting functionality in ArtiosCAD delivers true design freedom. For the first time ever, converters can make 60 degree V-notch cuts enabling the making of triangular pillars, something which has been impossible until now as no machine on the market can cut at an angle greater than 45 degrees. It can also cut angled curves, dependent on radius size,” added Knut.
“The obvious efficiency gains, when coupled with the huge level of creative freedom afforded to designers and the fact that it can be retro-fitted to existing Kongsberg C and XP machines, mean that VariAngle has the capacity to provide the cutting edge for sign and POS converters in an increasingly competitive sector.” 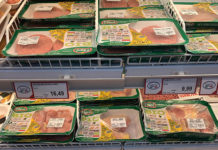 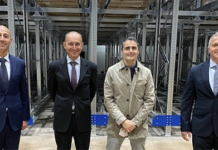 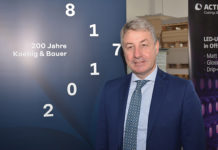