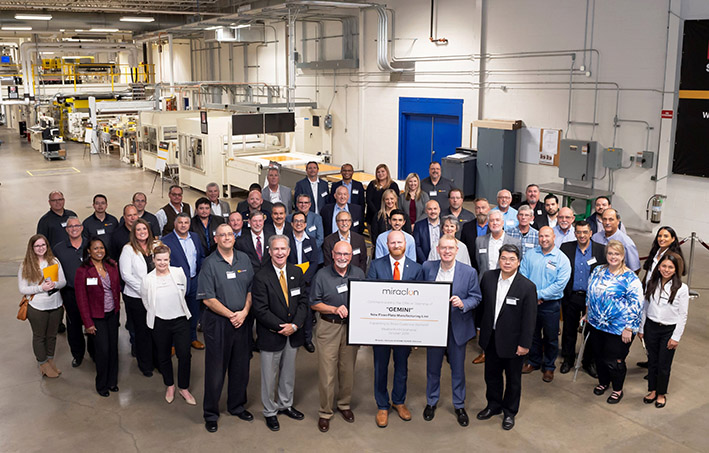 Miraclon, home of KODAK FLEXCEL Solutions, today officially opened its new flexo plate manufacturing line – ‘Gemini’ – in Weatherford, Oklahoma, United States; two and a half years after breaking ground on the project in April 2017. Initially manufacturing flexographic plates for customers in the United States, Canada and Latin America, the new manufacturing line will enable the company to keep up with demand after seeing year-on-year double digit FLEXCEL NX plate volume growth for the past five years.

“This is a momentous occasion for Miraclon. Just six months after our spin-out from Kodak, we mark one of our first major milestones with the completion of this project; on time and on target. While it demonstrates Miraclon’s ongoing commitment to invest in and expand the market for flexographic printing, the second manufacturing facility also brings source of supply closer to a large portion of our customer base and expands the manufacturing footprint of FLEXCEL NX Plates to two sites”, comments Chris Payne, Miraclon CEO.

The Weatherford plate manufacturing line, a sister operation to the company’s existing plate manufacturing facility in Yamanashi, Japan, was designed to meet increasing industry demand for higher quality flexographic printed packaging with more cost effective and efficient production processes. The $15 million investment underscores the ongoing industry growth and adoption of KODAK FLEXCEL NX Plates.
The new line produced its first KODAK FLEXCEL NX plate in October 2018, after which rigorous testing and alignment with the Yamanashi facility began to ensure the state-of-the-art manufacturing technology delivers the same high performance and quality Miraclon customers have come to trust and expect.
Chris concludes: “We can only continue building on our sector-leading legacy by ongoing investment in our employees, customers, R&D team and infrastructure. This is exactly what we’re doing. Today we’re not only celebrating the official opening of our second plate manufacturing line, but also Miraclon’s entry into its next phase of working with customers to shape the future of flexo.”