An investment in a Durst Tau 330 E single-pass digital inkjet press has proved the best decision ever made by start-up business Label Center that is on a sustainable growth curve where employee numbers are expected to triple within five years. 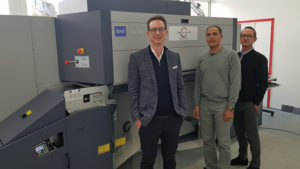 Five highly trained staff are the backbone of Label Center in Switzerland that has completed its first full year of production in a competitive local market where turnover will triple to CHF 1.5 million (€1.3 million) this year. Brand owners are now placing orders directly into the business where crucial factors to success are flexibility, cost-efficiencies and fast production and decision-making.
Proud Hossam Elgendy formed Label Center, located just outside Zurich, in November 2017, but didn’t start any production until the Durst Tau arrived in April last year. “We had no cash coming in, so it was imperative to start production as soon as the machine was installed,“ said Mr Elgendy. “It is no exaggeration to say that without the Durst Tau we couldn’t have started the business like we did.
“Market demands are for small and medium runs requiring fast turnarounds at a competitive price, which can only be done digitally. We look at the technical requirements and when all the criteria matches, it means that we can often do jobs for two-thirds of the usual price for customers. What makes me very happy is that big print owners and brands are asking for prices directly, and some conventional printing companies have started sub-contracting work to us. Having a highly-reliable digital press in-house means customers sometimes place orders when they visit.
“Digital already accounts for 60% of our work, but this will increase because I expect to have two digital printing lines working two-shifts over a five- or six-day week within five years and be employing 12 to 15 people. Our business plan was to break-even by the end of 2018, but we achieved that in August.”
Market-leading print quality, speed to market, no problems with finishing, an ability to print on a huge variety of substrates, plus and minimal waste, are also important factors in Label Center‘s investment in the Tau provided by Durst and its partner Jetpack.*Even potentially challenging jobs such as black on white with three different variants on each label – bar coding, numbering and QR codes – are becoming a money-spinner for Label Center. And work previously hot-foiled is now being done digitally on the Durst Tau, which also benefits from what Mr Elgendy describes as fast, efficient, powerful and easy-to-use Durst Workflow Label software. “The order was only for 500 labels, but 20 different variants for just one job. The customer saved 1,000 CHF for this one job,” said Mr Elgendy. “It could not have been done conventionally.”
Mr Elgendy added: ”We are a service provider, not just a printing company. What was also really important for us was the trust. We have always had the feeling that Durst and Jetpack were also putting their heart and soul into this new venture as well. They believed in us. Here we have a happy, experienced team and fast decision-making. We are hoping to achieve CHF 1.5 million turnover this year, then I plan to take my first holiday!”
Helmuth Munter, Label & Packaging Printing Segment Manager for Durst, manufacturer of advanced digital printing and production technology, said: “The Durst Tau E was launched to bring affordable digital production to increasing numbers of converters. In line with our ‘Configure Your Digital Future’ strategy, it’s also proving to be a real attractive prospect for forward-thinking companies and start-ups like Label Center who need variable, versatile, adjustable and configurable machine systems to expand their business reach.”