The 6th drupa Global Trends Report shows that the global print industry as a whole is in a stable condition.
• Global figures remain positive overall, with some regions and markets doing much better than others
• Political and economic concerns for the future cloud otherwise positive prospects for the majority
• The 6th report has been published

Globally 40% of printers stated their company economic condition was ‘good’ in 2018 versus 13% who described their condition as ‘poor’, the rest were ‘satisfactory’. This gives a positive net balance of 27%. For Suppliers the positive net balance was 19%. Both groups remain optimistic with c.50% expecting things to be better in 2019.
Conditions vary between regions and between markets. So North America continued to enjoy strong growth in 2018, Europe and Australia enjoyed steady growth, whilst Asia, the Middle East and S/C America were cautious and Africa was in decline. The 2018 results reflect the established pattern in most regions, although the decline in the Middle East and S/C America appears to be worsening.
The Packaging market thrives as does Functional, but there are clear signs of increasing caution in the Commercial market and Publishing remains subdued, with the encouraging exception of the books market. 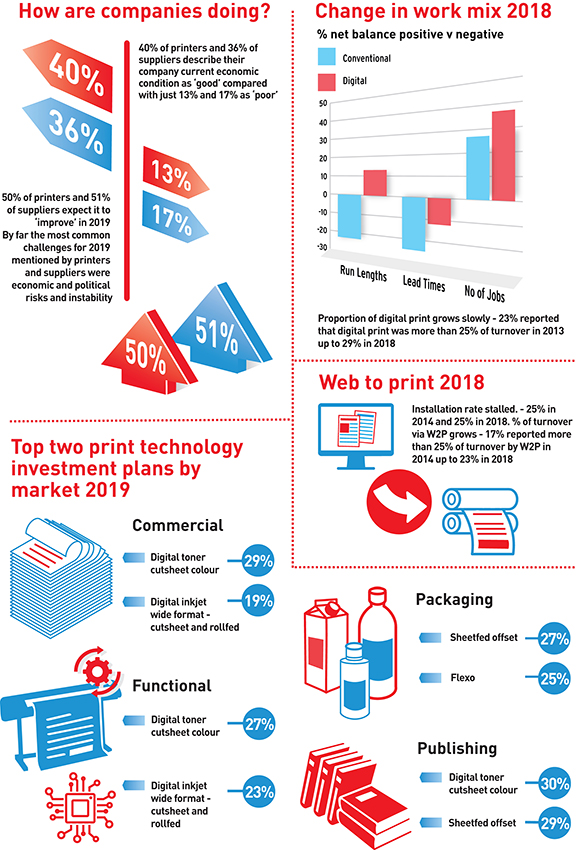 Sabine Geldermann, Director drupa, Messe Duesseldorf, commented, “The report shows that with a little more than a year to go to drupa 2020, the global industry is in robust health overall. Clearly, there are significant differences in prospects across different regions and markets as demand rapidly changes with economic conditions and evolving uses of print. That is the real value of this drupa Global Trends series. It allows readers to track those trends over time and identify how printers and suppliers alike can best invest to secure a strong future within the industry.”
The findings come from the 6th major annual survey issued last autumn to the drupa Expert Panel of senior decision takers recruited from printers and exhibitors at drupa 2016 and run by Printfuture (UK) and Wissler & Partner (CH). Over 600 printers and 200 suppliers participated with all regions well represented.
Richard Gray, Operations Director at Printfuture stated, “Most panel members are positive overall about the future, despite very clear concerns about the economic and political prospects for 2019 and beyond. It is striking that many show an increasingly confident grasp of how to exploit the rapidly changing opportunities for print, as the wider markets make increased use of digital communications.“
Most printers make money despite huge pressure on margins by increasing revenues through raising utilisation while keeping overheads as stable as possible. Globally we even saw a small increase in prices, despite substantial increases in paper/substrate prices. Suppliers also saw revenues and prices rise globally but with an even sharper decline in margins. 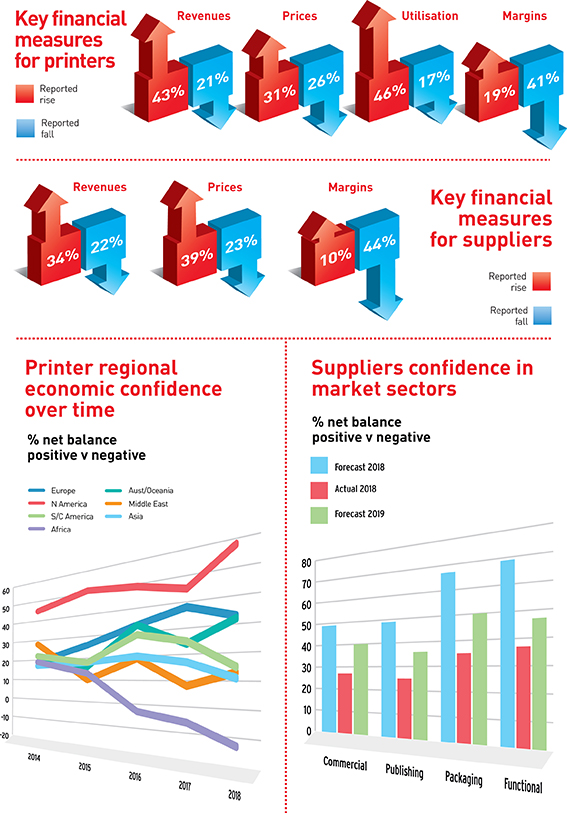 Conventional print volumes continue to decline but slowly. In 2013, 23% of printers reported that Digital print was more than 25% of turnover. In 2018, the proportion of printers had increased to 29%. Nevertheless, Sheetfed offset remains the most common form of print technology, present in 66% of all printers. Sheetfed offset volume continues to grow in Packaging but there was a clear decline amongst Commercial printers for the first time.
Web to Print volumes are climbing, but slowly. In 2014, 17% of participants with W2P installations reported more than 25% of turnover came from that source. By 2018, that proportion of participants had increased to 23%. Yet the proportion of printers with W2P installations is static – 25% in 2014 and 25% in 2018.
In terms of Capital Expenditure, 41% of printers spent more in 2018 than 2017, while just 15% spent less and expenditure grew in all regions except Africa. Those in Packaging and Functional markets were very bullish while those in Commercial and Publishing markets were more cautious. It was broadly the same pattern amongst Suppliers. For printers, Finishing equipment was the most common target in 2019, followed by Print technology and then PrePress/Workflow/MIS. As for Print technology, Digital toner sheetfed colour was the most common target for investment in 2019 for all markets, except for Packaging where Sheetfed Offset took first place. Yet the Packaging market saw a 5% growth in the proportion of SKU’s specifying digital print across all applications, except for Labels where the figure is already 40%.