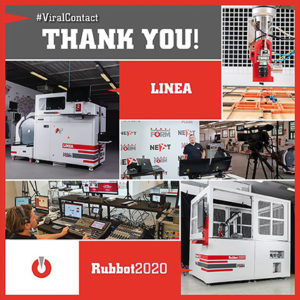 Viral Contact was the online event organized by Serviform, which thus decided to present a world preview of two novelties dedicated to production of dies.

Mauro Tomelleri, Sales & Marketing Director at Proform, live from Caravaggio (Bg) showroom, where the group has its headquarters, presented the two new machines: Linea and Rubbot.

Linea is the new bending machine that replaces the high-end Idea bending machine, market leader since 2008. Linea uses a bending system derived from the one in use on EcoPlus which, thanks to a new locking device in the bending area, allows you to push the folding speed to levels unthinkable for previous machines: 33% faster than EcoPlus!
Another important novelty is the completely renewed multiple broaching unit which features a quadruple broaching tool on the top and bottom. The availability of tools with various sections allows Linea to broach the pieces at the end and at the beginning reducing in this way the need to grind the pieces on the joints. 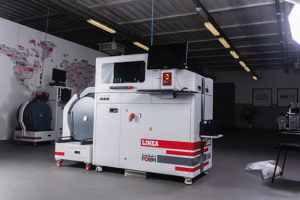 Other innovations in the grinding group for the production of sealing nicks. Now 6 superfast spindles drive 6 hard metal tools. The production time is reduced to a quarter of that possible with the previous generation machines. At the moment the smallest nick that can be produced is 0.2 mm but Serviform is studying the use of 0.1 mm grinding.
As by tradition for Serviform, the machine is completely electric and is characterized by a particularly reduced footprint and negligible energy consumption. Decisive improvements have been made to the output shear unit which further reduces the mechanical bending limits at the end of the piece.
An easy and intuitive machine control software manages the workflow, acquiring the CAD file directly from the design office. Linea will be available from next autumn. During the live demo, Linea performed several production tests, making cutting blades of different shapes, bendings, punching.
As far as the second technological novelty is concerned, it is a machine that is installed inside the Serviform group die-cutting plant and is still under development. It was studied to eliminate one of the last bottlenecks left in the production of dies, that is rubber cutting. 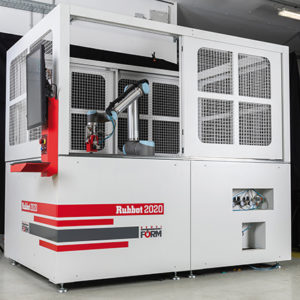 “Rubbot was developed by taking the advice of our die-maker but also from other customers, we have been testing it since the beginning of this year, it still needs further improvements, but at the end of this year we will install the first three units in die-makers that, like ours, intend to expand the production area of ​​the fully automatic dies. In these months of testing, however, we have already achieved positive results, reaching 15% of the dies produced by Foppa Fustelle with Rubbot. The technology we use needs to be refined above all in optimizing the paths of the robotic arm to speed up each pick and place cycle”, says Mauro Tomelleri.
Rubbot 2020 is the missing link for fully automated die production.
The machine is composed of an automated robot which, reading the CAD file of the rubber cutting, thanks to a video camera inserted in the mechanical arm, after reading the position of the die on the flat table, identifies the individual pieces of self-adhesive rubber, picks them up one by one, placing them in the correct area in the die. Rubbot is able to work with any type of sheet rubber commonly used for the production of dies and manages both rubber sheets cut with oscillating knife or waterjet machines.
A very important part of the system is a revolutionary nesting software that allows you to automatically modify rubber pieces designed by the CAD office to adapt them to the arm’s capture possibilities. This software allows you to reduce rubber waste by 30%!
A 6-pose die is produced in about 45 minutes, but Serviform engineers are working to further reduce this time. At the end of the work, the machine draws up a report, indicating the pieces that need further pressure before being considered finished and ready for delivery.
Today Rubbot can make 106 format dies, but the next developments will also see the addition of 145 format and finally 2000 cm. The final version of these formats will be presented during 2021.