If we could rewind the tape of our lives exactly one year ago, who wouldn’t get the chills back? We are not talking about the sense of fear and concern for our health that Covid still forces us to endure today, but rather for the anxiety and stress that in those days of terrible uncertainty pervaded our minds also and above all for the feared reflections on the production system and therefore for everyday life of our working days.
Fulvio Curioni, owner of Curioni Sun, remembers those moments well: he too was forced to delay, even if only for a few months, an important project to expand the production site in Teramo.
Despite the premises, the balance is extremely positive: Curioni Sun delivered and installed all the machines planned in the year of the pandemic and even the commercial activity did not suffer any setbacks, allowing production planning of over a year. 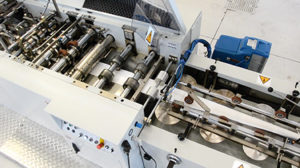 “After a first moment of bewilderment, due to Drupa cancellation, which has always been the most important event for us, we have changed our strategy. Having available the new model of SM 545 bag making machine, which we would have launched in Düsseldorf, we started making customized demos using the web, and in the summer months we also managed with all the necessary precautions to receive some customers in our site”, Fulvio Curioni tells us.
These efforts have produced an excellent result as the sales force led by Roberto Silvestrini has already sold 11 SM545 in various countries around the world. Not a bad start, considering all the premises!
“The new machine reflects the construction philosophy of all Sun Master, which is an all-in-line process, with a simple and extremely functional machine layout.
An important novelty is the solution with flat handle: the lateral exit is eliminated, avoiding an annoying footprint for users. The new layout with the flat handle favors the side-by-side position of more lines in less space.
The new SM545 guarantees more flexibility in formats and superior performance”, Curioni adds.

The demand for paper shopping bags is growing 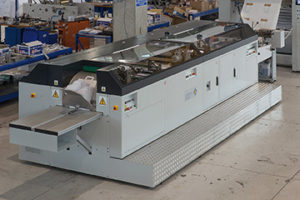 In recent years Curioni Sun has witnessed an increase in requests from its customers. “Undoubtedly sustainability and this predilection for paper products has benefited us in some situations”, says Curioni, “even if to be honest I think, and I say this also against my interests, that paper versus plastic war is not justified as it is faced today at media level.
The problem lies in the recyclability of the materials but above all in the civic sense of consumers, having said that, we have some customers specialized in plastic shopping bags, who have expanded their range to include paper shopping bags as well”.

Service
The time has come for Curioni Sun to strengthen its service. The history of installations has now reached a considerable number of machines in every part of the world and assistance is an aspect that should not be underestimated for every machine manufacturer.
A service will start shortly in Slovenia that will cover the area of central-eastern Europe, a very important market for Curioni Sun; an additional assistance center will be launched as soon as possible in the Gulf countries and the Iberian Peninsula.
Due to the pandemic the latter two projects have undergone forced stops but will soon be completed.

The expansion works of the production plant will start in spring 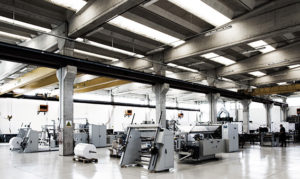 It was already planned last year, and also thanks to the results obtained, Fulvio Curioni has decided that in 2021 spring will start the expansion works of the production site in Teramo. The goal will be to increase production capacity but also to reduce delivery times.
“If Covid had not happened, the expansion and service would most likely have already been completed, but we are very satisfied with what has been done and optimistic for the future. We can’t wait to be able to go back to travel and visit customers, participate in fairs, deal with the market in a real way, even if for now we will have to settle for Virtual Drupa, in which we will participate from 20 to 23 April 2021”, concludes Fulvio Curioni.