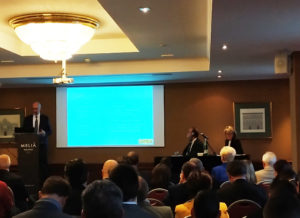 Last November, the usual autumn technical Gipea meeting took place in Milan, from which emerged positive data about the sector, which recorded a growth of 6% from 2016 to 2017; another new feature announced is the new site of the association, which wants to become a real exchange place for members.
Elisabetta Brambilla, president of Gipea, presented the results of a Eurostat survey, then elaborated by Centro Studi Assografici, which show the excellent performance of Italy with a growth in turnover of 6%, at fourth place after Germany, Great Britain and France. Also presented the new website of the association and the communication plan for 2019, whose objectives are to give greater visibility to the group, strengthen the sense of belonging to the association, attract new members and involve the new generations.

European digital label press installations overtook conventional press sales for the first time in 2017, according to the latest Finat RADAR report. Today operating digital label solutions in Europe are 2300.
This is a trend that is set to continue, with 45% of FINAT converters indicating they will be purchasing a digital press over the next 18 months, with inkjet projection volumes surpassing toner-based and hybrid system projections. Finat RADAR also reported that 2017 was a year of growth for the not-prime label sector. Historical RADAR analysis has often indicated that highest growth sectors for converters were the prime label markets of food, beverage, health and beauty. However, in this year’s RADAR Converter Survey, respondents indicated that 2017 was a year of robust growth in markets such as automotive, consumer durables and industrial chemicals. The only prime label market that was among the four highest-growth sectors for 2017 was the beverage segment.

The RADAR report also included details about investment levels for digital presses. Nearly 60% of digital presses sold into the European marketplace in 2017 were in the price range of €250,000 to €750,000. 10% of digital press installations were priced below €250,000, and 8% of installations were more than €1million.
The survey also asked converters to rate specific technical application areas and to indicate their criticality when it comes to customers and prospects. More than one in four converters indicated that the ability to offer digital printing capabilities was critical, while just 4% said the ability to offer digital was ‘not important.’ After digital, the next most-critical ranked criteria included removable adhesives, low migration inks and extended text/extended content labels. Generally speaking the most critical topics are the increase of labor cost and raw materials.

Italo Vailati presented a Gipea document that provides important guidelines for the production of labels in contact with food. Obviously, the document does not pretend to solve all the doubts of the labeling but provides practical information on how to operate, defining the legislative references, analyzing the production process and giving indications on the correct drafting of declarations of conformity: it also analyzes the GMP, the evaluation of the risk and traceability. But the document also serves the members of Gipea to qualify themselves with customers, demonstrating the value of the group. The final version will be available in the early months of 2019 and the document will be dynamic, so it will be updated whenever changes in the legislative system take place.

The Economic Observatory
Gianluca Cinti, Partners – Consultants and associated professionals, and Federico Visconti, Rector of LIUC at Castellanza, presented data about Italian labeling and analysis of business trends. From 2008 to 2017, 95 companies were observed, with revenues from € 200 thousand to almost € 74 million, which had a total turnover of € 728 million in 2017. The 19 companies with revenues exceeding € 10 million represent more than half of the sample’s turnover. Eurostat data show the growth of Italian producers also for 2017 and the data recorded confirm a growth trend also for 2018. So 2017 was a year of growth with a recovery of speed after the slowdown in 2016, even if not all operators are involved in the growth: in 2017 there were 28 companies that recorded a drop in revenues and 23 companies that had revenues lower than 2008. Small and medium-sized companies recorded good performance and in summary in 2017 the sector recorded a sustained growth and maintains a good margin, even if slightly down compared to the previous two-year period and in general there is a growing polarization of services.

SERVIFORM OPEN HOUSE 2022: 160 operators from all over the world met in Caravaggio for a three-day event organised by the Serviform Group