The company located in Brenna (co) specialized in the printing and transformation of flexible packaging, in particular for micro-perforated packaging of food products, was the protagonist of the launch of a product, coffee in capsules, capable of upsetting consumer habits in every part of the world. A revolution that started right from the province of Como…

Corapack’s story is an incredible one and testifies once again that opportunities are often within everyone’s reach, but what makes the difference is the entrepreneur’s flair, capable of looking beyond. But let’s go in order, the company was founded in Cantù in 1982 by Massimo Radice, also very active at associative level in Atif, where he held the position of president. The technical training of Mr. Radice, 12 years in a multinational in the plastic sector, led him to devote himself to the research and development of new products as well as the purchase of raw materials, while his wife Mariateresa Colombo, who founded with him the company, thanks to its expertise in financial matters, manages the administrative management. “If I think that our adventure began in 1982, in a small shed with 2 workers, and today we find ourselves in an area of 12,000 sm, we employ about 50 people, and we are an international point of reference in the micro-perforated film sector for packaging, I cannot hide my satisfaction”, begins Massimo Radice, who is now supported in the business management by his sons Fabrizio, general manager and Michele, production manager.

From micro-perforated film for bread to filters for coffee capsules: a global success 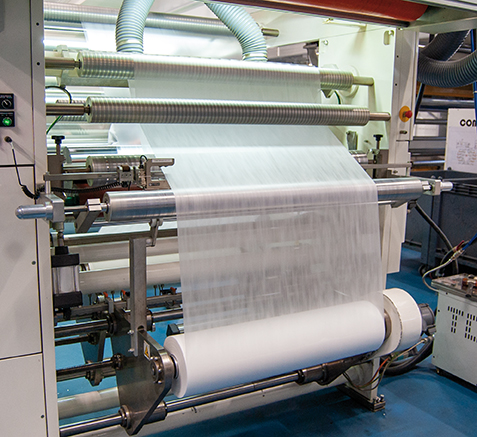 Corapack immediately specialized in the production of micro-perforated films for the bakery industry, helping to develop the launch of these products in supermarkets. The problem was to find a product that was able to pack the bread while still hot, preventing condensation and humidity created by heat, compromising the flavor and texture of the bread. From bread to fruit and vegetables, the micro-perforated films have represented an extraordinary opportunity for the marketing of these foods within the supermarket chains that in those years began a path of great expansion, offering consumers the opportunity to taste fresh products with a longer shelf life and greater safety guaranteed by the packaging.

Corapack therefore began its business with a first hot needle micro-perforating machine, when flexo printing was still not considered up to gravure, therefore also in packaging it was mostly used to print texts in one or two colors, to indicate the expiry date of the product or a barcode. Over the years, micro-perforating machines have grown and today Corapack has a dedicated department with 6 machines for hot perforation, two machines for macro-perforation, one for laser perforation, slitter-rewinders, special machines also for production of micro-perforated packaging films. Following a backward evolutionary path, Corapack has also added 2 flexographic printing machines, the last of which was installed at the end of 2019, a latest generation Koenig & Bauer Flexotecnica Evo XD, i 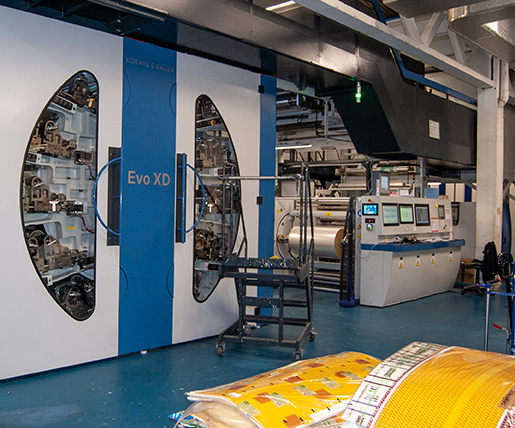 nstalled also a Comiflex, purchased new only 4 years ago. The department is completed by a Simplex laminating machine by Nordmeccanica, a machine on which were produced the special double and triple layer laminated films for the coffee capsule filters, a product that has made Corapack famous in the world, supporting multinationals in the food & beverage sector in the worldwide launch of now famous coffee capsules.

It is a short step from bread to micro-perforated films for fruit and vegetables, and thanks to a project carried out together with Coop Italia, trays packaged with micro-perforated film are born, capable of preserving delicate products such as strawberries, extending their shelf life on the supermarket counter, keeping intact shape and taste of the fruit, which otherwise was packaged with stretch film, causing irreversible damage to the product. “Thanks to this project with Coop, we were able to introduce a new concept of packaging in the fruit and vegetable sector of large retailers, further developing the micro-perforation process and choosing for some types of products the cold macro-perforation of the film with total removal of the residual material after perforation, to avoid problems of micro-dots on the peel of the products, originated instead by hot micro-perforation, which by its nature melts the film, creating a sort of ring of melted material around the hole, which in turn creates a shadow that is projected on the fruit, creating an anti-aesthetic micro-dots.

When a phone call changes your life… 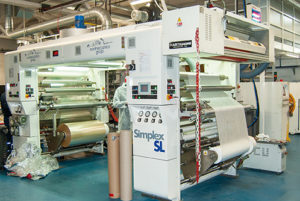 In the second half of the 2000s, coffee capsules began to be developed, effectively giving rise to a real revolution, capable of upsetting the habits of consumers, creating a new sector. To tell us about Corapack’s decisive contribution in the development of these capsules is Fabrizio Radice, a graduate in macromolecular chemical engineering that, combined with an innate relational and commercial ability, led him to personally follow the project that has actually changed for the better the fate of his family company. “The first coffee capsules were made of rigid plastic materials with filter caps, which made disposal difficult at the end of their life. So arose the need to introduce a film that could act as a filter, and we began to conduct tests with an Italian leader in the production of coffee, who however put the project aside”, begins Fabrizio, giving life to an incredible story. “I received an anonymous phone call, which I decided to listen despite the initial great skepticism. On the other side of the phone I had a person who did not qualify, but who once understood that we could work for them, gave me an appointment for next morning at 9 in their Swiss office. I left very early to be on time for the appointment, there was not even time to sign all the confidentiality agreements, because it was October and in January the multinational should have come out on the market with these new capsules with microperforated film filter, that together with their usual suppliers they had failed to develop. I was locked in a room, I left my mobile in a box and I was asked to swear that never ever what I saw and discussed shouldn’t have been shared with nobody”, says Fabrizio.

The challenge was enormous, because a solution had to be found that could be commercialized in less than two months. Corapack, who had never worked with multinationals of this type, but thanks to the know-how and the desire to engage in this innovative project, took up the challenge, and hectic weeks began full of numerous tests, trips to Switzerland, visits of engineers and technicians. 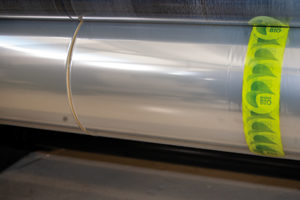 “The main difficulty in creating these micro-perforated films for coffee pods was that the tolerances were practically zero, so it was necessary for us to adopt a series of procedures and control measurements to comply with the very strict standards set by the customer. After several modifications, we were able to develop the micro-perforated film in such a way that the required filtering function was perfect for dispensing coffee and in January 2007 the product was launched on the market as we know it today, with a sales volume of 1,5 billion capsules per year. With great satisfaction and a bit of pride, we can say that behind that planetary success, there is Corapack, a small company able of supporting an absolute leader multinational in the launch of a new project”, adds Fabrizio. Obviously this project has also opened the doors to other subsequent orders by this group, making Corapack an important point of reference. Even today, since international patents are expired, the long wave of that extraordinary project is strongly present, and many capsules manufacturers are calling Corapack from all over the world, asking for their support.

“The multinational, for production volumes but also for a policy that does not allow to have a single supplier, asked us to share our experience with other suppliers, to be able to create manufacturing plants for the production of this film in other sites, and this was also a reason of pride, a small company like ours was therefore called upon to teach companies much larger than us, also multinationals. From a production point of view, for us this order meant using one of our 6 micro-perforating lines for this job, because it is true that the order is important, but we are talking about a substrate of a few square centimeters”, adds Fabrizio, underlining that working with a multinational has allowed Corapack to make a qualitative leap in procedures, in manufacturing way and relationship with the market. 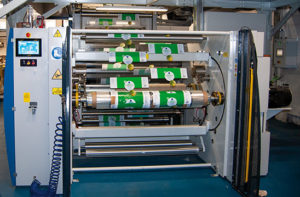 The other major trend that sees Corapack’s R&D department relentlessly engaged in the study and development of new materials is aimed at compostable film market. Once again, the demand is stimulated by fruit and vegetable sector, which since the mid-nineties with the advent of the first organic products has consequently requested compostable packaging films, to transmit with the philosophical idea which lies behind the purchase of an organic product. The experience acquired by Corapack over the years in the management of compostable materials has allowed the company to take up the last challenge, again regarding coffee capsules, which today inevitably must be produced with compostable plastics, including film acting as a filter.

“We have been marketing compostable films for coffee capsules for about ten years, and now we are ready for the last step, that is to create materials that are compostable at home, and not just at industrial level, where a composting plant is required.

The goal is to offer a coffee capsule that can be collected in the organic fraction”, concludes Fabrizio Radice, who from the height of his education as a chemist of materials, launches another challenge for the packaging sector: to reduce the materials used as much as possible and then think seriously, efficiently and effectively in terms of recycling, starting from home collection with dedicated baskets, and going up along the entire supply chain, up to the final plants, using compostable materials for all that series of products that dirty and contaminate the packaging, which then become difficult to recycle.

Attention to sustainability for Corapack means being personally involved, starting from production process and a flexible and efficient organization of the structure wisely managed and coordinated by Michele Radice aimed at minimizing the impact on the environment, because it is true that the ability to respond quickly to market stimuli depends on the ability to listen and develop, but an adequate and solid structure is essential at the basis. The company uses electricity from the photovoltaic system that covers its plant; the thermal recovery system for the fumes coming from the catalytic post combustor guarantees the integration of printing drying systems and the air conditioning of the environments; modern supervision systems reduce to a minimum the waste due to working errors during the printing and the micro-perforating phase of the films; present also an efficient system for the recovery and distillation of solvents from flexographic printing.
Corapack is there and will do its part!

Koenig & Bauer honors innovative contributions to sustainable printing with the...